Russia has given Ukrainian officials a deadline of 3 p.m. local time (7 a.m. ET) on Sunday to decide whether to meet for talks in the Belarusian city of Gomel.

Vladimir Medinsky, the head of the Russian delegation and aide to President Vladimir Putin, told state news agency RIA Novosti they would stay until the allocated time and wait for a response.

“As soon as we receive this confirmation, we shall immediately set off to meet our counterparts in the negotiations,” Medinsky said. “We stand for peace.”

However, Ukrainian President Volodymyr Zelensky said on Sunday he would be willing to hold talks with Russia but rejected their proposal for a meeting to be held in Belarus.

Belarus is an ally of Russia and played a key role in Russia’s invasion of Ukraine. Russian troops invaded through the Belarus border with support from Belarus’ government, according to Ukrainian officials. The Biden administration subsequently sanctioned nine Belarusian defense firms for their support of the invasion.

The US State Department on Thursday said Zelensky remained “a prime target for Russian aggression,” while Zelensky himself said, “the enemy marked me as target No. 1.”

Belarusian President Alexander Lukashenko said Sunday he was “waiting” for Ukraine to come to the country for negotiations with Russia, to be hosted by Belarus.

“We are waiting. Everyone is in Gomel waiting. If they come then there will be negotiations,” Lukashenko told reporters after voting in the constitutional referendum in Minsk on Sunday, according to Belarusian state news agency Belta.

Ukraine has said it shot down a cruise missile launched at Kyiv on Sunday from neighboring Belarus.

“Ukrainian Air Force shot down a cruise missile launched at the capital of Ukraine, Kyiv, by a TU-22 bomber from the territory of Belarus. This is another war crime committed against Ukraine and its people,” Oleg Nikolenko, spokesperson for Ukraine’s Ministry of Foreign Affairs said in a tweet Sunday.

Belarus has played an important role in Russia’s invasion of Ukraine. Russian troops invaded through the Belarus border with support from Belarus’ government, according to Ukrainian officials, and the Biden administration has sanctioned nine Belarusian defense firms for their support of the invasion.

At least 64 civilians have been killed since Russia invaded Ukraine, the UN said on Sunday.

The agency’s Office for the Coordination of Humanitarian Affairs reported “at least 240 civilian casualties, including at least 64 people killed” in the fighting that has erupted since Moscow launched the attack.

The statement added that the damage to civilian infrastructure has deprived hundreds of thousands of people of access to electricity or water.

Hundreds of homes have been damaged or destroyed, while bridges and roads damaged by shelling have left some communities cut off from markets, it said.

Ukrainian President Volodymyr Zelensky Sunday accused Russian troops of targeting civilians, including children, and called for an international investigation into the conflict.

“What they are doing in Kharkiv, Okhtyrka, Kyiv, Odessa, and other cities and towns deserves an international tribunal. We are documenting their crimes. And there would have been many more of these crimes if it hadn’t been for our courageous defenders,” Zelensky said in a video address posted on his Facebook page.

“We have to call a spade a spade. Russia’s criminal actions against Ukraine show signs of genocide. I spoke about this with the UN Secretary-General,” he said, arguing that Russia should be stripped of its voting rights on the UN Security Council.

Zelensky said there was “not a single facility in Ukraine the Russian troops would consider an unacceptable target.”

In the capital Kyiv, residents awoke Sunday to find the city still firmly under Ukrainian control, despite two massive explosions some 30 kilometers, or about 18 miles, south of the city lighting up the sky overnight.

Fighting has broken out on the streets of Kharkiv, Ukraine’s second-largest city, after Russian forces entered the city

The Russian Ministry of Defense has previously said it was targeting only military infrastructure, saying in a statement: “The Armed Forces of the Russian Federation do not strike cities and towns, they take all measures to save the lives of civilians.”

But Zelensky said Sunday: “They lied when they said they would not target civilian population. Since the first hours of the invasion, Russian troops have been hitting civilian infrastructure.”

“They are fighting against everything and everyone,” Zelensky said. “They are [hitting] kindergartens, residential buildings, and even emergency vehicles. They use artillery and missiles against whole residential blocks where there have never have been any military infrastructure. Many Ukrainian cities and towns are surviving in conditions we previously had only during the World War II.” 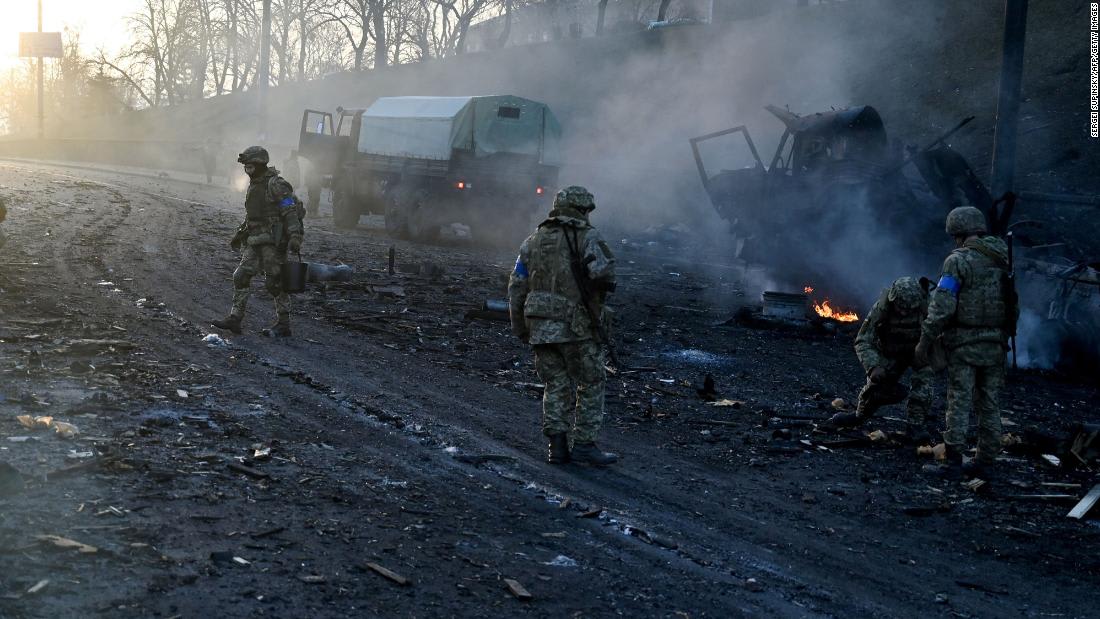 Ukrainian President Volodymyr Zelensky said he would be willing to hold talks with Russia but rejected the Russian proposal for a meeting to be held in Belarus, a staging ground for Moscow’s invasion of Ukraine.

“We’ve heard a lot of talk about a meeting between Ukraine and Russia that might end this war and bring the peace back to us. Quite often [Minsk] is mentioned as the place for these negotiations,” Zelensky said in an address posted on the presidency website on Sunday morning.

“The location was not chosen by [Ukraine] nor by [Belarus]. It was chosen by the Russian leadership.”

Belarus has played a key role in Russia’s invasion of Ukraine. Russian troops invaded through the Belarus border with support from Belarus’ government, according to Ukrainian officials. The Biden administration has sanctioned nine Belarusian defense firms for their support of the invasion.

Addressing Belarus directly, Zelensky said: “If there were no aggressive actions from your territory, we could talk in Minsk, your city. When you were neutral, we talked in Minsk. That’s why we’re not talking in Minsk now.”

In 2015, Ukrainian and Russian officials met in the Belarus capital to draw up the Minsk Agreements, which included a fragile ceasefire in two areas of Ukraine taken over by pro-Russian separatists the year before.

“Of course we want peace and want to meet. We want to end the war. Warsaw, Bratislava, Istanbul and Baku were offered to Russia. Any other cities are fine with us as long as there are no missiles flying from this country,” Zelensky said.

Ukrainian President Volodymyr Zelensky is calling for people around the world to join the fight against Russia.

In a statement on Sunday, he accused the Russian army of killing civilians and praised Ukrainians for having the courage to defend themselves.

“Ukrainians have manifested the courage to defend their homeland and save Europe and its values from a Russian onslaught. This is not just Russia’s invasion of Ukraine. This is the beginning of a war against Europe, against European structures, against democracy, against basic human rights, against a global order of law, rules and peaceful coexistence,” Zelensky said.

Addressing “all citizens of the world, friends of Ukraine, peace and democracy,” Zelensky said: “Anyone who wants to join the defense of Ukraine, Europe and the world can come and fight side by side with the Ukrainians against the Russian war criminals.”

The statement added that those who wish to join should contact the Defense Attache of the Embassy of Ukraine in their countries.

“Foreigners willing to defend Ukraine and world order as part of the International Legion of Territorial Defense of Ukraine, I invite you to contact foreign diplomatic missions of Ukraine in your respective countries. Together we defeated Hitler, and we will defeat Putin, too.”

The Russian military claimed advances around the southern Ukrainian cities of Kherson and Berdyansk, a Russian Ministry of Defense statement on Sunday said.

He also claimed the southern city of Henichesk and the Chornobayivka (Chernobayevka) airfield near Kherson had also been brought under control.

CNN could not immediately verify those claims.

Kherson has been at the center of a fierce battle for a strategic bridge, with days of fighting. When a CNN team arrived in Kherson on Thursday night, Russian tanks were in the streets and jets were flying low overhead, terrifying residents.

According to an assessment issued by Britain’s Ministry of Defense late Saturday, Ukrainian troops remain high-motivated and able to hold key positions.

Claims of surrender: The Russian statement also claimed, without evidence, there was a “mass refusal of Ukrainian military personnel to continue hostilities.”

Konashenkov said a Ukrainian anti-aircraft missile regiment surrendered in the Kharkiv region of northeastern Ukraine, and that 471 Ukrainian servicemen were captured.

Russian state television has frequently shown footage of captured Ukrainian servicemembers, some of whom are shown signing documents pledging to quit hostilities.

Synehubov urged residents of the eastern city to stay in shelters and not to travel anywhere. Russian vehicles entered the city of Kharkiv on Sunday, he said.

“The Russian enemy’s vehicles advanced into the city of Kharkiv. Including the central part of the city. Warning! Do not leave your shelters!” Governor Synyehubov said in a Facebook post Sunday.
“The Armed Forces of Ukraine are eliminating the enemy. Civilians are asked not to go out in the streets.”

Kharkiv, with a population of about 1.4 million people, sits less than 20 miles (32 kilometers) south of the Russian border and was approached by Russian forces shortly after the invasion started on Thursday.

Ukrainian forces have managed to deter Russian troops from entering the city for the past three days, but Synehubov said this has now changed, with fighting taking place at the heart of the city.

Peskov said the delegation included representatives of the Ministry of Foreign Affairs, the Ministry of Defense and other departments, including the presidential administration, RIA reported.

“We will be ready to start these negotiations in Gomel [Homiel],” Peskov said, according to RIA.

The Kremlin has continued to put out messaging that Russia would send representatives to the Belarusian capital of Minsk to talk with Kyiv, despite its military’s continued and unprovoked assault on Ukraine.

The Kremlin has claimed previously the Ukrainian side had countered with a proposal to meet in Warsaw and then dropped contact.