Have you heard about reverse charging and wonder what does it mean? Some new phones have the innovative reverse charging feature, that allows you to charge other devices just using a cable. In other words, the phone becomes a power bank to save the day, when you’re running low on battery juice and there’s no power outlet around.

Today, flagship rugged smartphones like the Ulefone Power Armor 14, come with a massive 10,000mAh battery and support reverse charging. And a phone with a fully charged 10,000mAh battery will still have 30-50% in the tank even after two full days of moderate usage. So here’s the question, how to make use of all that extra battery ? Of course you could just use this phone to charge your other devices on the go, including other smartphones, smartwatches, wireless earbuds, and other accessories. But how exactly does reverse charging work? How long does it take to charge your other gadgets? And will it really bring convenience? Now, without further ado, check out the two videos below and you’ll know!

In the first video, the Ulefone Power Armor 14 goes through a reverse charging test. The Power Armor 14 packs a 10,000mAh battery, that has been fully charged,, and the Xiaomi Pad 5 has an 8120mAh battery, which has been totally drained before this test. With a USB cable connected to the phone and to the tablet, that needs to be charged, reverse charging begins. Amazingly, the Xiaomi Pad 5 is charging and can be powered on and used again, and the Ulefone Power Armor 14 keeps juicing up the tablet until it runs out of battery. In the end, the tablet battery is charged from 0% to 59% for an additional 54 hours of use!

What benefits can reverse charging bring you in daily life scenarios? In the second video, the Ulefone Power Armor 14 goes through a practical reverse charging test in which it performs as an improvised power bank to charge multiple electronic devices. From charging phones to charging a phone stabilizer or action camera, to charging an LED flash. The Power Armor 14, with a whopping 10.000mAh battery, can give an extra boost, when these devices are on the verge of dying. And you don’t have to use a specific charger and power outlet. At the end of this video, it also tests the phone-to-phone reverse charging speed.

Even though reverse charging is not that fast and the electrical transfer loss can be huge, it is a low-power solution very useful in emergencies. For example, if someone needs little power and does not have a charger or a power bank on hand, a phone with reverse charging capability can be a lifesaver. And the Ulefone Power Armor 14 just comes in very handy. 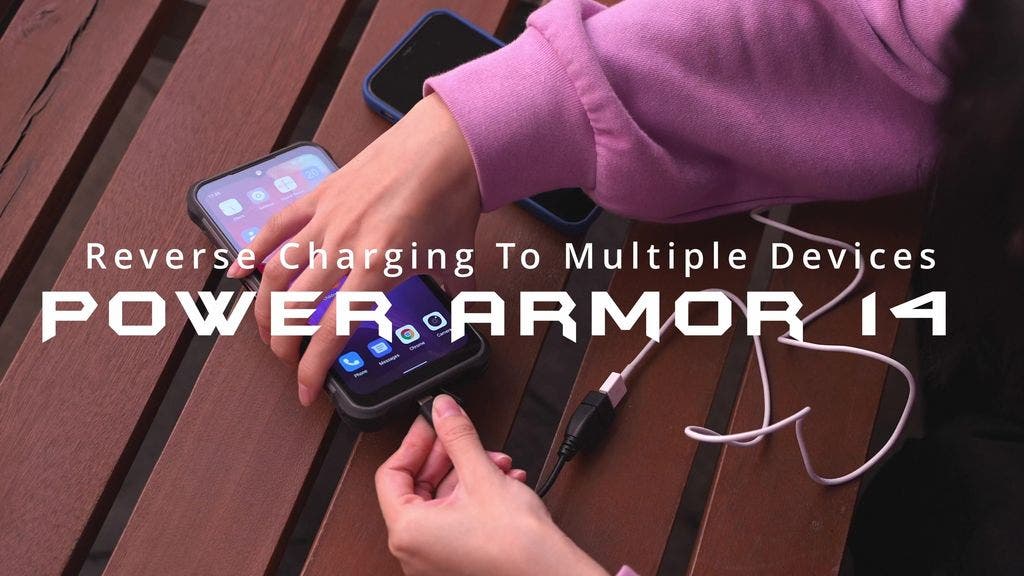 But now let’s talk more about Ulefone Power Armor 14. Certified by MIL-STD-810G durability, this phone can withstand 1.5-meter drops onto concrete. And it holds off dust and survives 1.5 meters underwater for 30 minutes thanks to its IP68 and IP69K certification. Just unbreakable. Almost. The biggest highlight of Power Armor 14, and probably the biggest reason why you should consider it, is its super large 10,000mAh battery. Which supports 18W fast charging and 15W wireless charge. Besides that it pack 6.52-inch IPS display, 2.3GHz quad-core processor, 128GB of built-in storage, 6GB RAM, 20MP rear main camera, macro lens or 16MP selfie camera. All of this make this phone pretty competitive.  And you also get some high-end features like face to unlock, fingerprint ID, underwater camera or NFC chip.

The Ulefone Power Armor 14 is an excellent choice if you need a durable phone- And the 10,000mAh battery and OTG reverse charging are really cool cherry on top. It’s just a bargain at the standard price of $249.99 on Ulefone official website, considering its tech specs. Impressed? If you like this flagship rugged smartphone and want to get more info about it, you can go to the Ulefone official website to learn more.