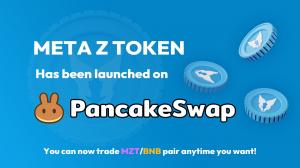 MZT is available for trade in Pancakeswap

Meta-Z NFT store will be launched by April

Play & have fun, Earn rewards, Interact with others, Create and sell NFT’s or purchase it

PHILADELPHIA, PENNSYLVANIA, UNITED STATES, March 29, 2022 /EINPresswire.com/ — Metaverse gaming industry has seen a great revolution in the last few years as an effect of people’s passion in turning their imagination into the virtual world, the competitive scene has been very intense which led to the birth of so many metaverse projects working to resolve the same problems which are converting creative imaginations to digital assets using fun methods, we “as in Meta-Z team” believe that we have all capabilities and ingredients to carry out this mission into the next level.

Meta-Z is Play to earn multiplayer game subcategory under Metaverse Gaming, with game builder where users can create their own NFT’s and a separated NFT marketplace where they can trade their Items using their online wallets.

The foundation stone for Meta-Z has been laid in December 2021, by its founder Younes Kasdi, with the help of Joseph Grey and Nadhir Ferdji.

Meta-Z World is a stimulating project that uses a broad variety of technological and speculative stacks, managed towards creating a metaverse on the basis of the four different Meta-Z Systems, including Meta-Z token as the main currency. This will allow players to have a new point of view to a game world.

The use of cutting-edge cross platform blockchain technology in the Meta-Z World will increase overall notice and engagement in this project moving forward. We are working towards the creation of a global community of players interacting with Meta-Z World for multiple purposes such as entertainment and economic outcomes. Meta-Z World aim to engage people together virtually using a metaverse to create wide communities.

Meta-Z world is divided into 4 sections :

1- Meta-Z game : a 3D online multiplayer game built in Unity engine with Polygon design where players can interact in the metaverse, play to earn free MZT tokens and use their NFT’s to update their status inside the game.
2- Meta-Z game builder : it’s a game tool which may be used by users to create and design their own NFT’s which they may use in the game or trade in the
marketplace later.
3- Meta-Z marketplace : it’s the market of Meta-Z users where they can connect their online wallets, purchase and trade their items ( NFT’s) using MZT( token), then use it later in the game or keep it in their wallets.
4- Meta-Z token( MZT) : its the only Meta-Z game and marketplace’s currency.

Meta-Z token (MZT) is a BEP20 token powered by Binance Smart Chain, launched in January 31th in Pancakeswap ( Dex exchange ).
It is designed to be used as a reward from playing Meta-Z game and to purchase and trade items in Meta-Z marketplace.
Use cases :
– Purchase and Trade items between users in Meta-Z marketplace.
– Get it as a reward from playing Meta-Z game.
– Transaction fees for trading NFT’s .
– Staking : Meta -Z team have launched MZT staking pool in UNICRYPT !
You can join MZT profitable staking pool and Share a reward pool of 20,000,000 MZT following few easy steps:
Buy MZT from Pancakeswap
Stake your MZT in Unicrypt from 1 to 10 months
Subscribe to the reward pool & Enjoy up to70% APY
Min to Max staking amount: Stake between 50,000 to 10,000,000 MZT

Meta-Z Marketplace is a platform that allows players to trade collectibles in order for them to use their owned items on the game.
Excepted to be launched by April 2022 !

Vision :
Building a metaverse game, with P2E system, where people can play & have fun, earn rewards, interact with others, create and sell their items as NFT’s.

Mission :
Create an appropriate, integrated and balanced ecosystem.
Building a game and NFT store according to the high quality requirements of the market.
Achieving all set goals by time then moving to market competition.

The metaverse games market has witnessed a huge influx of capital in recent period !

Meta-Z is a new project still at early steps with small cap and a lot of potential while the team is developing the game, an active team having the ability of making huge development’s in short period which can be a big competitor in this market in soon future.

EIN Presswire’s priority is source transparency. We do not allow opaque clients, and our editors try to be careful about weeding out false and misleading content. As a user, if you see something we have missed, please do bring it to our attention. Your help is welcome. EIN Presswire, Everyone’s Internet News Presswire™, tries to define some of the boundaries that are reasonable in today’s world. Please see our Editorial Guidelines for more information.